Under the Tree: A New Page from Linden Lab 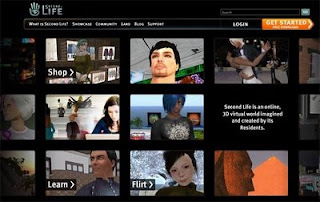 I must admit that I consider the new SL home-page quite a Christmas Present. It's slick and, despite the sniffs from design-prima-donas ("Puh-leeze! Black backgrounds are sooo 2001") I think it showcases the variety of SL experiences well. To wit:

What else strikes the eye, other than the complete absence of virtual hillbillies?
Posted by Iggy O at 4:43 AM