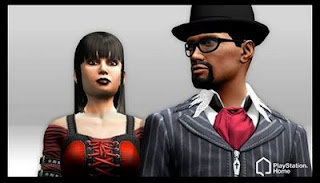 It's hard not to be excited when a major company rolls out a new virtual world. Sony's much-anticipated Home came out today from Beta-testing.

Home's greatest drawback is that Asian and European users will not be allowed on the same grid as US users. That was done, I understand, for legal reasons.

And that is awful. Home's graphics and avatars are promising...well, the guy in my pic is superbad..approaching my conception of Mojobox Kane, our OpenLife correspondent. The woman needs a stylist. That said, the lack of a worldwide community is a show-stopper for me.

One of Second Life's best draws is its international audience. My German class-mentors, Tenchi and Cynthia, could not collaborate with me in Home. I'm not even sure SL would still be around had its population been balkanized by region. The number of concurrent users is simply not large enough. Moreover, many of the language initiatives that educators are doing now in SL would be moot. Even my own students practiced their second languages this semester, and one of them interviewed two Germans involved in virtual soccer--in German and at length. Then he translated their remarks.

So for those reasons I'll pass Home by, even though Sony is giving it away to Playstation users. Since I don't own any consoles, I'm out of luck.

But I wish them well. The debut of Home marks another milestone in the attempt to bring virtual worlds into the mainstream.

Google's Lively has bombed. Will Home? It has an automatic user base and they, like some gamers who use SL for planning and socializing, may use Home to hang out between bouts of shooting stuff.
Posted by Iggy O at 2:22 PM

I'm an American and I've been exploring Home since the closed beta. I too was disappointed by the exclusion of the rest of the planet. I can't help but think that's going to change when their lawyers get it sorted out. Beyond an international platform, here's what else I want with Home:.

First of all I want a substitute for those days when I could go into a bar and meet a lot of people. After AIDS, at least in California, most of that disappeared. I'm not talking about sex; I'm talking about ideas, different points of view, different ways of thinking, all generated spontaneously, an experience that email can certainly augment, but never replace. However, I've found it's a good idea to listen to what avatars are saying in a group before approaching. Trading obscenities is a boring way to spend your time.

Second, I like the idea of expanding my physical space into virtual space, an idea that Home is only partially successful at, but then it's early days yet. When you look out a window, the scene you see should be something you can actually go to. When you step into a building it should be less like a blurry download and more like a physical transition. When you go to the world map, it should be map, not a cutesy animation. Why not a globe of the Earth you could spin? It's like reading a novel. You don't want the author to deliberately break the illusion he's trying so hard to create.

Third, although a lot of Americans complain about crass commercialism, I don't believe there's anything wrong with using Home or Second Life for commercial reasons. What would a city be without shops? They all want your money. Hopefully, as Home, grows, there will be, like a city, enough variety to please almost everyone.

Finally, we need constructs like Second Life and Home. As human civilization expands to fill every nook and cranny on the planet, we need to find new space, a new way to expand that enriches us, a new way to communicate, find friends and express ourselves. It may not be Home or even Second Life, but I think it's the future.