No, this entry will not run in the Times Dispatch. I just have to wonder--why make this?

"Because it's cool and because I can" is a great answer: from a 13-year-old boy.

I have to admit, I did laugh at the overflowing "fountain o' poop" demo, as well as the maker's explanation that the toilet can be hurled, grenade-like, at someone before it explodes.

Well, we have something to look forward to the next time Philip Linden gives an in-world talk.

Speaking of Philips...when South Park ran its hilarious Christmas Special with the talking turd "Mr. Hanky, the Christmas Poo" my wife and I laughed hardest--in a crowd I might politely describe as a bit coarse--not at the ongoing poop jokes.

We bent over double, while no one else got the joke, when Stone and Parker decided to have Philip Glass perform at the town's banal and non-offensive "holiday" pageant. 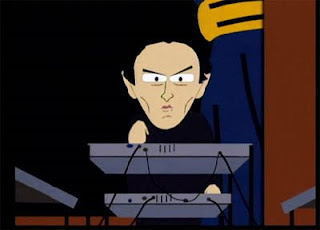 I'm hoping to find that sort of mockery in SL--for now, however, it's flying-turd sight gags.

Happy Solstice, everyone! And those other holidays, too...
Posted by Iggy O at 7:33 AM