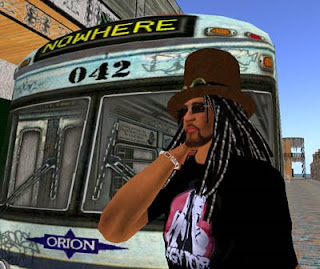 Lee's wife Clary saw an article in the New York Times about a philosophy of teaching called Edupunk, and now I know what I am and my pedagogical style becomes as plain as day to me.

Check the Wikipedia entry on Edupunk for a skinny on this. I'll focus on how SL fits into my "worldview" (a term that I must admit, I crib from one of my avatar's namesakes, Ignatius Reilly).

Those of us who came of age in the 1970s recognized that the world is such a mess because those in power are almost always venal, short-sighted, and utterly untrustworthy. I do, incidentally, hold out hope for President-Elect Obama; he may provide some much-needed relief for a terminally pessimistic educator. After eight years of a bumbling-yet-swaggering wrecking crew, it cannot get worse in the Oval Office.

Punk Rock was certainly the soundtrack for our coming-of-age rituals in the Era of Malaise. Add a dose of post-Hippie hard rock and early metal--T Rex, Iggy Pop, Alice Cooper, Aerosmith, Black Sabbath, Led Zep--and you have the formula complete. If we'd had Second Life in the 70s, our avatars would have looked a lot like the cyberpunks of SL today: in black, overinked, overpierced. We'd have gone out and stomped blingtard-boys and stolen their fake girlfriends.

Though I grew up, I still retained a desire to shock students out of the numbing conformity that entraps them and puts them on the path to corporate oppression as well-fed Dilberts (until they are laid off). It's still a system that will chew them up and spit them out, unemployed, into Depression 2.0, our current era.

I don't scream "don't major in business!" but I do tell my charges that whatever major they choose, it should not be by default. If they enter business or any other field, they should strive to be masters, not slaves, of the field and pursue what they do with passion. That was a part of the Punk ethos: live life fully. Whatever the technical crudeness of the Punk sound, no one would say that the played tunes or lived their lives offstage without passion.

In the Wikipedia entry, the authors note how "Edupunk has risen from an objection to the efforts of government and corporate interests in reframing and bundling emerging technologies into cookie-cutter products with pre-defined application."

This has resulted in the fetish for "measurable outcomes," which at state schools often means conformity with standards set by a retarded group of conservative (or equally retarded PC progressive) legislators who have not been in college for decades.

In terms of campus technology, one finds stupid mandates to put all courses into bland, gated online communities like Blackboard, a course-management tool I will no longer use in my classes. Instead, I use free and freely available wikis and Open-Source tools to teach (including SL, though it is controlled by a corporation, for now ). Edupunks like me long to see major corporations that restrict the flow of information smashed, and copyright, a relic of a prior century, made obsolete.

I think we'll win this fight. Most of my over-40 peers are ridiculously clueless about how the Internet has changed society (as evidence I present the McCain campaign). But Net-stupidity is bipartisan in the US. Older academics of the Hippie era are also lunkheads about technology. They will never use it to radically transform their teaching.

Virtual worlds have that potential, if they permit free creation of content. Let the copyright-robots try to hunt down a million violators in a thousand virtual worlds. They'll fail as badly as have the recording companies in shoving the MP3 genie back into its bottle.

And we'll be teaching our students to be savvy writers and thinkers: because whether they work on Wall Street or an organic farm, the students we teach will bring an information-driven revolution to the complacent, Cheeto-fed, carbon-dioxide-farting masses. In places like SL, we'll be building the tools for the revolutionaries, one prim at a time.

All we need to do is hone their analytical skills. They may use them how they please, but they will do so with open eyes.
Posted by Iggy O at 4:38 AM